After the June 7th primaries, it’s pretty clear who will be the Democratic Party’s nominee for president this November: Hillary Rodham Clinton. This isn’t set in stone but, after President Obama publicly began endorsing Clinton last week, it’s pretty clear that she’ll be the nominee. The response, for many anti-Hillary Democrats across the nation, has been rage. A lot of hate has been built up against Clinton and her campaign as Bernie Sanders shared her spotlight over the course of this last year. Many took to Twitter using the hashtag #ImNotWithHer to express their disfavor against Clinton. This is a response to America’s (specifically, American Democrat’s) hate for Hillary Clinton.

Let me begin by saying that I love Bernie, and I would much rather see him president than Hillary Clinton but–keep reading—we must not let this love for a nominee work against us, fueling our hate for another. Yes, I’m defending Clinton.

Keep in mind that my reasoning ties back into one major theme: the running for president will, ultimately, be Clinton v. Trump. In just five months, our nation will be deciding either on Donald Trump or Hillary Clinton as our next president. The two candidates for America’s next president are Donald J. Trump and Hillary R. Clinton. I don’t know how many different ways I can phrase this, to stress to you the mere fact that one of those two people will be running our nation in just a few months.

Yes, for many of this, it’s picking between the lesser of two evils. And, though typically this is what happens when election year rolls around, it’s been made harder for us to do because Bernie Sanders has stepped up and truly–for once–represented the American People. Many Democrats, including most young Democrats, are threatening not to vote for Hillary when the ballots roll out. They’re threatening to boycott the polls or write in another name. But, let me tell you this: refusing to vote and writing in someone else’s name on the ballot is only adding onto the votes for Donald Trump. It’s only causing party separation in a nation that is solely defined by political parties. It’s childish. 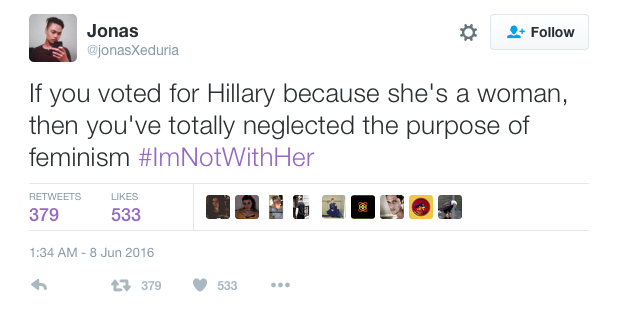 Yes, Clinton is an incredible liar (compulsive, really); yes, Clinton accepts way too much money from private organizations in under-the-table political agreements (she also accepts illegal, foreign money for her personal bank account); yes, she claims to know the qualms of the middle class (there’s that lying part again); and yes, she defended a child rapist, laughing it off (she also worked for a senator in the 60’s, working against the Civil Rights Movement).

So, yes, Hillary Clinton is actually a pretty shit person. And, no, I don’t want her running our country. But, goddamn, though her allegations are chilling, Trump is just flat-out terrifying.

Think of it this way: a vote for Hillary Clinton is a vote against Donald Trump.

Trump must be defeated. There’s almost nothing standing between him and the White House at this time, especially since Clinton is beating Trump by as little as three points.

And Donald Trump will make it to the white house if the Democratic Party splits over the Sanders v. Clinton issue, over the #ImNotWithHer issue. Republicans are scoffing at Democrats because we’re too busy fussing over candidates to look at the bigger picture. Though “fussing” may be a bit of a devolution of the problem that is Hillary Clinton, it’s the perfect illustration of how many Democratic Americans are acting right now: they’re acting like children.

Our parties are already polarized enough as it is–an issue that I believe strongly against, an issue that Bernie Sanders believes strongly against. So, are you truly a Bernie supporter if you’re willing to split and polarize your own party? The Democratic Party is in danger of losing its power, not just in the White House, but all over the nation, if we don’t get our shit together.

Splitting our party between two candidates–two ideologies–will take our voice out of politics, will work against us in Washington and will, ultimately, take away the power granted to us in the Constitution: all things that Bernie Sanders fights for.

Please quit encouraging hate within your own party and try to better our country, even if you have to suck it up and take the harder road.

One thought on “#ImNotWithHer – A Response to the Anti-Hillary Hashtag”