Boy, have I had a loooooong day! We were booked with things to do beginning at 6:45 AM this morning when we had breakfast. We spent the majority of our day at the Newseum in DC (right on Pennsylvania Avenue). The Newseum is basically what it sounds like. News + Museum = Newseum. A museum about the history of journalism and journalism yet to come. It also featured a bunch of different exhibits such as a memorial to 9/11, a huge chunk of the Berlin Wall, and they had a whole section portioned off for Jackie & John F. Kennedy. We did a lot of exploring around and took a great number of pictures. Below is a picture of my awesome Red group which is lead by Brian Wilson. 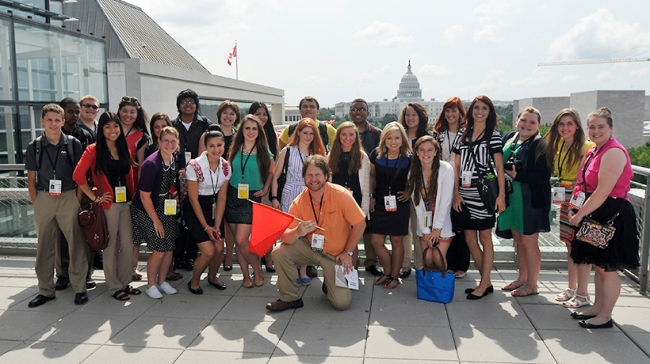 We all really enjoyed ourselves and I was especially entertained by Brian’s shenanigans throughout the museum. The only downfall was the fact that we were at the Newseum for five hours. I don’t know about you all, but staying for five hours in the same museum can get a little old.

We arrived back at George Mason to listen to CNN Chief Political Correspondent, Candy Crowley, talk about politics and her experience mediating the debate between President Obama and Mitt Romney last fall. She gave a really interesting speech and answered all of the questions thoroughly. I know a lot of people were talking about (I should really say tweeting about) how inspiring her speech was. She kept a positive attitude and gave mind-changing advice such as, “Don’t wrap your career around your life, wrap your life around your career”. She also touched on the theme of journalism and stressed that being a journalist means that you find out the information by taking a step ahead.

After dinner, we were able to have time with photographer Neil Leifer. You probably don’t recognize his name, however, he is a legend in sports photography as well as many other types. Below is one of his many famous pictures:

I didn’t know what to expect from his presentation, but I can honestly say that I enjoyed seeing him. He flipped through some of his pictures and told us the stories behind them. My favorites were probably the Charles Manson pics and the story about the Spanish Ivory always being in the oval office (so, instead of being sent to photograph President–Reagan?–he, instead, photographed the ivory).

We finished up the night by presenting our projects from the Newseum. Each group was assigned a part of the museum to study and then we had to create a presentation (don’t let the word “presentation” fool you..there were NO PowerPoints). Honestly, I thought that sitting through a bunch of groups’ presentations would be boring, but I was swept off my feet. Each and every group kept the audience bursting out with laughter whether it was a Beyonce reference (I think I counted two of those) or just a really hot guy doing something completely stupid yet entertaining (I think I counted about one “really hot” guy and two or three “mediocre”.)

Yes, I just rated about three or four unnamed guys at this conference. You’re welcome.

Anyway, we all have a busy, busy day tomorrow so I should hit the sack!

P.S. I would, now, like to take credit for the Twitter hashtag #REDisRAD. I might have come up with that a couple of weeks ago and it caught Brian’s attention and now everyone is saying it. Once again, you’re welcome.